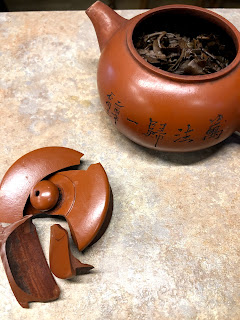 It’s always a bit awkward when someone breaks one of your most valuable teawares right in front of you.  Sigh….


This happened just this morning.  But I have been mentally preparing for this momentary blip for the last few months and years.  So, I think am okay with it.


I am of the philosophy that you should use and fully enjoy your best teawear every day.  The Art of Tea is a living art, a daily skill, a performance, a meditation.  It would be a greater shame, I think, to have died and not exhaustively used and enjoyed such a pot.  Because if it had just sat in a china cabinet or worst in a drawer how could you have enjoyed it to its fullest?  Would you be more happy being buried with it?  Or it being boxed up and sent to a thrift shop?  Or inherited to someone who is incapable of such appreciation?


And man, have I ever enjoyed this big one.  Look at its patina, luminescent like the sunset.  You can’t put a price on a patina like that… just beaming radiance!  Unfortunately, I no longer have the financial expeditiousness nor means to replace such things.  I think it might surprise some readers that because of my minimalist view point, I actually own very very few tea pots.


It had a good “Last Supper” at least.  It was filled full of Yang Qing Hao… If I was a teapot, I think that’s the way I would want to go… hahaha


Well, the last two weeks I have had horrible, horrible tea luck.  I have had developed an allergy to only a select yummy teas, had some sell out just before purchase, and now this.  There is a saying that bad luck comes in 3s so hopefully it’s up and up from here.  I think I have needed something to bring me down, to humble myself, in the tea world lately.  Don’t you think?


But really, if these are my tea problems, then I actually consider myself quite lucky.


I have made the decision that I would rather have my tea table accessible to my very very young children and enjoyed communally, as a family.  Then to have things tucked away, off limits, exclusive.  Sharing tea with my family, the properly delicious gongfu way, has brought me more joy than this very very expensive teapot.


I had always thought one of the little ones would smash it by pulling the teatable on to the ground or by picking it up and dropping it or throwing it.  Would have never thought the very pregnant member of the family would find it too uncomfortable to bend over the teatable so as to pour the tea out of the pot while standing over the hundred year old hardwood floor not the bamboo tea table.


When the lid hit the ground there was an awkward, “I’m sorry!”

Maybe it was some kind of test to see if you love her more than your passion for tea. Congratulations, you passed the test and she'll love you even more for it during the rest of your life!

Sounds like this is coming from someone who has also been "tested". Hope you passed too!

I took solace in some very aged tea of yours yesterday to celebrate this pot and to console myself.

My son broke the handle of my most beautiful zhuni teapot, by accident, when he was 5 or 6. I stayed completely calm and didn't blame it at all. Actually, it was my fault to have kept the teapot so close to where he was playing. But the real reason for me staying so calm was that I thought it could be repaired! Turns out it wasn't possible! But by that time I had already processed the shock! Now I'm using a glove to pour from this teapot and it reminds me of how important a handle is.

I'm picturing you pouring with that glove... priceless.

So, it kind of a rite of passage for those who gong fu with small kids then?

The break on this pot was clean so, I also think, it could be repaired but I never really considered it until I saw your comment. I put the pieces back together and put the lid back on. But because its in 4 pieces, I think it would be so expensive.

My heart sank when I saw the above picture. I have been similarly tested in the past but I was able to find a replacement lid through a friend that fit.."pretty good" enough from a cheap set. Not the same but it works. Last resort, it becomes your best cha hai. Best of luck.

Thanks for that suggestion. I have never thought of trying to get a replacement lid.

I have come to the conclusion that all new cars come with two sets of keys and all yixing pots should come with 2 lids... period!

Sorry about your teapot, and thanks for sharing your thoughts and stories. Things get broken all the time and sometimes can be repaired, which might well be the case of your lid.

Here are a few humble repair tips from my very limited experience, whether you might want go that way or not.
- an old school two part epoxy would be the glue of my choice here (the one that takes 24hrs to set, not the 5min one). BPA might be of some concern, but we're talking about just a very tiny amount of glue that would be mostly hidden inside the seam (ideally close to zero exposed surface so incomparably less than what a single can of tomatoes is/were lined with). When well cured it shouldn't be leaching.
- securing the 4 pieces together is more tricky than if it were just 2 where an elastic would be enough. A trick is to use a plastic melting gun and use little blobs of plastic on the exterior to hold the pieces together. The plastic takes only seconds to harden, and once the epoxy is set one can easily pop off the plastic of or cut it of with a knife. One might need to degrease the surface so that the plastic even sticks to it.
- the extra epoxy glue that comes out of the seam, can be either wiped of with some acetone while still wet, or just left as it is and cut off with a sharp knife after the glue hardens (a curved blade would be needed for the inside of the lid).

Thanks so much for such detailed repair advice. I have already thought about gluing it but I'm not sure if I really want to go down this route.

I guess there are a few reasons why I don't want to do that. I am concerned about the toxicity especially if my family is going to be regularly drinking from the pot. I also concerned the fix will look bad, especially with skill set... hahaha.

In my head I picture a repair that actually adds to the beauty of such a pot. Rather than trying to hide the break, an appreciation of its damage is much more beautiful to me. See here:

Thanks for the post. A good reminder in detachment for us all. That being said, I always wondered about this pot. May I ask what kind of clay it is made with and how much was the volume? I know you often don't go into detail about such things so I thought I would ask.

Thanks for your interest in this beauty. In this post I go into a lot of detail about this pot:

Although the lid still comes together and fits on top, I have decided to secure it with a thin elastic band. This way it can be removed from the pot and still stay as one. But I am still unsure about using it.

I think if I did use it like this. I would have to not fill it completely full and would probably have to carefully two hand pour it. It would really change my gong fu brewing substantially, but at least, it can be used, I think.

Thanks again for the suggestion above.