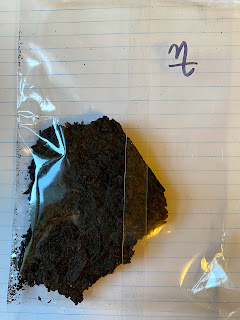 
Dry iron pressed/ hydraulic pressed leaves smell like more humid and aged storage odours of rotting woods and slight chocolate.  You can see the dimples from the iron mold also the very dark aged and humid stored colour of the leaves.  Immediately looks like it could be Hong Kong traditional stored Shu.


First infusion has a watery, woody, aged library taste to it with some returning aged sweet hay tastes.  This first infusion is understandably watery and light as the tight press will take a few infusions to release a bit.


The second has an aged woody taste with a bit of chocolate then a woody sweet hay finish.  The leaves have a real aged taste to them.  Over the taste is aged puerh sweetness.  The mouthfeeling is still watery and faint suggestion of gripping sand… faint.  There is a lingering coco sweetness with aged tastes minutes later.


The third infusion (pictured) has a rich sweet woody hay like onset.  The mouthfeel starts to develop a bit of an oily stone texture to it which matches nicely the rich tastes.  This infusion is really smooth and rich and aged tasting.  There is a nice camphor wood taste along creamier rich tastes in the breath and aftertaste.  The Qi is nicely warming and reassuring on this rainy cooler Summer day.


This could be a very nice aged Traditional Hong Kong storage iron bing alternatively it could also be aged shu iron bing either way it had a lot of fermentation with a lot of age.  The wet leaves look like shu puerh to me.  Conventional wisdom wants me to think it is this 2001 Iron Zhongcha as it even matches the description of “rich concentrated dark brew with nice camphor and aged taste”.  But this one is shu and seems more fermented and/or humid stored than that one in the pictures.  I’m leaning more toward to an aged iron pressed shu puerh possibly Traditional HK storage…  I think it is possibly a Kunming 7581 brickfrom the 90s possibly older.  It has that vibe all over it… think I nailed this one… 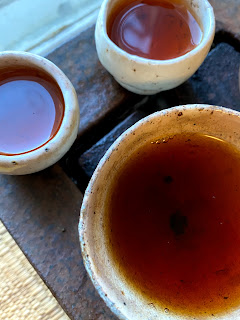 The fourth infusion has a woody hay sweetness with a rich, almost coco, taste over a slippery tongue coating and nice camphor cooling woody with rich coco in the aftertaste.  This is a nice aged tasting puerh with a deeply penetrating warming energy.  The Qi is soothing but doesn’t make me tired.  I start to feel faint soft fluffy bodying feelings.


The fifth infusion has a woody hay tasting with more mineral and less woody and coco tastes as the sessions progress.  There is a mineral and slight coco taste to it some camphor aged tastes.  There is a very soothing very aged taste to this puerh.  Nice aged warming feeling in the body which gives me a nice glow and wakes me up gently early in the morning.


The sixth infusion has a more mineral earth and woody taste with less hay sweetness and more mineral now.  The mouthfeeling is slippery and just faintly gripping which is enough to give the camphor taste something to root on to in the aged mineral woody aged aftertaste.  I am really basking in the warming soothing Qi of this puerh.


The seventh infusion has a woody deep mineral taste to it with a water type of sweetness.  This puerh has lost a lot of rich tastes and is now a mineral aged tasting puerh.  It has just suggestions of a more gripping mouthfeeling espically as the small particles of leaf are consumed in the liquor.  There is a cooling camphor aftertaste with a bit of sweetness to it but more mineral tastes.  Warming and unraveling Qi that is waking me up slowly.


The eighth infusion has a smooth aged woody mineral taste to it with some camphor cooling in the throat and aged mineral finish.  Nice warm undulating waves hit me from the Qi of this puerh.  The mouthfeel is smooth with a bit of substance in the throat.  Nice relaxing awakening feeling.


The ninth infusion is a cooled cup and it delivers a really delicious rich almost nutty sweet coco taste.  It tastes refreshing warming in the same an iced coffee would feel.  Less cooling camphor, woody, and mineral here in the cup that was left to cool to room temp.


Getting back to the leaves after an hour break has the tenth infusion giving off a rich coco mineral taste.  The camphor and woodiness is almost gone/ quite faint now.  There is now a nutty sweetness to it.  The aged taste is really rich and satisfying.  The Qi is warming especially on the face now and has a slow deep soft but still quite energizing feeling.


The 11th is a rich nutty almost woody mineral taste.  The mouthfeel is slippery and full and has a bit of throat stimulation.  No more camphor left.  It’s a simple and rich broth.


The 12th has a rich almost nutty almost mineral taste that comes off nutty sweet in the finish.  Lots of warming energy that especially afflicts the head but also penetrates deeply.  It pushes me into a sweat.


The 13th is mainly a mineral and woody tasting onset with some dryness aspiring in the mouth and throat.  There is a subtle almost nutty sweetness in the finish.  Warm warm energy.


The 14th is much the same without the dryness in the mouth and throat.  There is an almost date sweetness with mineral taste that starts to develop with aged woody tastes.  This is a nice aged taste and warming Qi here.


15th is luke warm cup and tastes of nutty sweetness more rich with a mineral aftertaste and some tight throat.  Still undulating and warming comforts offered by this one.


16th is more of a nutty camphor taste with some mineral tastes interspersed throughout.  There is some throat tugging but a nice sweet mild finish.  My face flushes- I am warm on this rainy overcast summer day.


17th is a 30 second steeping… it pours out really dark brown.  It has more roasty nutty rich woody profile and even some faint camphor.  The taste is really nice… I will come back to this pot tomorrow… 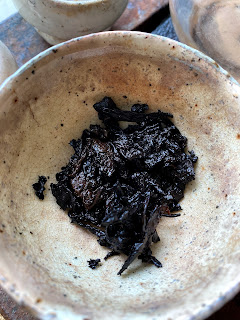 The next day I end up just grandpa steeping it out and it really delivers.  A thick oily nutty profile with a nutty sweetness to it.

Dear Matt,
I’ve finally finished my blind tasting! Don’t take my review of “B” too literally, I gave it a terrible review, but don’t worry, I will make up for it with my next review — of your very generous gift.

As promised, these are the teas I sent you, in no particular order. Later we can exchange the correct order:

Just as an aside, this would be fun to do with each of your readers as well. And profitable for you guys if constructed right. X amount of $, Y amount of teas, send them out, wait a couple weeks, reveal each one. You could even make somewhat open posts on each tea where we could comment before and after they were revealed.

I'd be willing to spend at least $100 to participate in something like that. Tea for thought.

I take no offence and rather appreciate your honesty! I knew your strong opinion on Yesheng before sending it so expected the negative review. We share a similar concept on Yesheng I feel like it is not puerh and should rather be approached like a completely different. I also rarely drink it - only a few times a year which speaks for itself!

It was my curveball sample as was your 90s Kunming brick. Hahaha

The reason I wanted to send you sample B is that it is unlike most Yesheng these days due to its really old school processing and factory-like pressing. The other reason is that it is of only two puerh I own older than 12 years that have been in my own 100% Canadian storage their whole life. I find it interesting the balance between old school Smokey barnyard and really vibrant perfume quality for an Yesheng. It’s Qi sensation in the mind is noteworthy but like you... I’m not a big fan of Yesheng especially when people sell it along side puerh.

That does sound fun and like a great idea! It must seem painful to simply read the blind reviews without being able to participate. But the whole thing of organizing and putting it all together sounds like a terrible amount of work!

Maybe it’s something Teas We Like might venture into? Or every few or so years I organize or send free samples to my readers/ other bloggers. It might be something I do free and if I ever get around to it, you are on that list!

The good news is that you can or will be able to purchase most of these blind samples once they are revealed.

Very painful haha! Whatever you end up doing or not, I really appreciate all the work you do put into this site. Marco too!

I'd love anything you came up with and would be more than happy to make it worth your while.

Liquid Proust is putting something similar together right now, not to completely steal his idea.