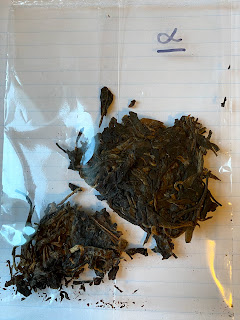 A day or so after experiencing the elegance of Marco’s blind sample “Delta” then pretty much having an out of body experience later in the day with “Gamma”, I hope to tread a bit more cautiously going forward.  No more crazy two blind samples in a day type of thing.  With the weather still quite a bit warm here this summer I look for something a bit younger or dry stored and settle on the look of this sample with the symbol “Alpha” on it.  I snip open the sealed package and smell…


The dry leaves have a meaty musk meat like odour that immediately remind me of Laos puerh.


First infusion has a peachy and very musk gamey almost salty watery meat kind of onset that tastes similar to the dry leaf odour.  Very faint pungent finish with a chalky/talc mouthfeeling and tongue coating.  It has a blank chalky finish.


The second infusion has an almost sweet almond watery clear with gamey musk onset.  There is a lubricating mouthfeeling.  The Qi is starting to swell in my chest a bit.  There is almost a creamy almond but mainly watery sweet finish.  A bland chalky talc develops in the mouth minutes later.


The third infusion has a woody sweet almond onset with a faint less obvious gamey taste.  There is a soft cloud like round sweetness to this one that is interesting.  Almost peach fruity but not really.  The finish is sweet creamy almost faint marshmallow.  The tongue coating is more sticky faint sand.  I can feel my heart racing mildly here.  This has an East Yiwu close to or even over the boarder vibe to it.  In some ways it reminds me of the Essence of Tea Tian Men Shan but not at all as substantial. 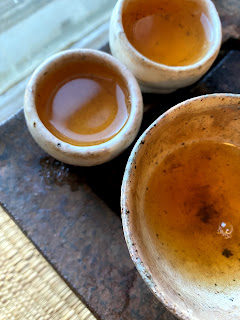 The fourth infusion has a pondy, almost blank bland woody, almost mushroom onset with almond sweetness.  There is some faint fruitiness that tries to establish itself.  The mouthfeeling is a soft almost sandy stickiness.  The throatfeeling is faint and somewhat deep.  The Qi is very calming on the mind and almost hypnotic.  The aftertaste is a walnut taste not really fruity but with a very faint not really there candy on the breath.  I can feel a mild slow heart sensation in the body.  The Qi is starting to build in the mind.


I’m having a really hard time placing this puerh.  In some ways it tastes like an old dry seal stored puerh and in other ways it tastes rather new.  In many ways it is like the 2001 Naked Yiwu.  Even the location has evaded me.  This is a tough one.


The fifth infusion has a woody and mushroom and almond onset over a pondy base taste.  There is a creamy incense building almost caramel sweetness that comes out of these tastes.  The mouthfeeling is becoming drier pucker stickiness.  There is a long solid incense base taste.  There is a long candy like sweetness developing on the breath.  The Qi is a bit hypnotic and a bit relaxing.  There is a lot of nuanced complexity that just can’t quite punch through such as orange peel, herbal tastes, and floral tastes.  My scalp feels a bit tingling.  This is a really interesting infusion.  The thought of this being a seal stored Youle crosses my mind- again this puerh is really hard for me to place.  My mind is starting to really unravel.  It has a nice deep warming Qi sensation to it which suggests age.


The sixth infusion has a pondy woody incense onset with some sweet almond and almost suppressed floral.  The mouthfeeling is becoming really engaging and has a sticky drying cotton mouth effect.  It feels almost like there is something caught in the mid-throat.  There is some faint long candy in the aftertaste as well as walnut taste and almost peach orange taste.  The mouthfeel is really intense here.  The Qi is warming and pushes me into a sweat.  I feel quite stoned from the Qi.  There is a deep strength to this puerh in its Qi, mouthfeeling, and even taste, in a subtle way.  This is a really interesting puerh to me.


The eighth has a fruity floral onset over wood and incense notes.  There is a bland chalky base taste then a faint coolness and a strong true apricot fruit finish almost like apricot jam.  This infusion has turned a corner and is very apricot tasting.  Very delicious.  A sticky almost puckering Qi is there.


The ninth infusion has an almost nutty not really toffee sweet onset the woody and incense taste is less now and a fruitier and sweeter suggestion is left to enjoy.  There is a pondy aftertaste.  There is a bit of a mineral taste here and a floral and apricot fruit.  Over a slightly puckering sticky engaging coating in the mouth while the throat seems pretty absent throughout this session is carries a touch of very very faint coolness.


The tenth infusion is a pondy, kind of fruity, slightly woody incense taste initially that has an almost chalky bland midtaste before returning mild chalky apricot aftertaste.  The aftertaste is not super long not overly complex throughout any of the infusions but sometimes carries a very very faint candy suggestion like this infusion does.  The Qi is strongly warming in the body and feel like aged Qi energy.


The eleventh infusion has a fruity incense taste with a bland chalky finish with some faint florals and barely candy appearing over the bland aftertaste finish.  Mouthfeeling is thicker chalky pucker.  Warming euphoric Qi.


The 12th infusion has a mild fruity onset with a bland almost woody creamy pondy taste.  There is a slightly sticky mouthfeeling and a faint fruity almost candy finish.  This puerh is dropping off fast.  The Qi is mild.


The 13th infusion I steep for 30 seconds over flash… it yields a woody bland onset with a bit of creamy fruity finish with some throat coolness.


I put this in a mug to grandpa steep out. It tastes of generic smoky incense and some woody bitterness.


The wet leaves are different colours of aged olive green and coppery colours some of them are chopped leaf grade indicative of a factory production. 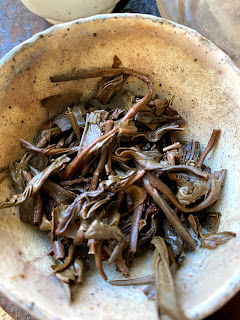 Overall, this puerh is really difficult for me to place.  More difficult than the others so far.    The first few infusions and the dry leaf almost remind me of Laos puerh or something East Yiwu close to the boarder with a meaty and gamey taste.  Then the next group of infusions develop a pondy woody taste to it with some fruity and creamy sweetness.  The mouthfeel builds and becomes thicker almost pucker.  The Qi is warm and indicates something more aged as does the incense base taste that develops.  These infusions remind me of a dry seal stored older more old school puerh.  In the later infusions a strong apricot sweetness is highlighted.
This puerh changes a lot throughout the session which makes it kind of interesting.  It is definitely dry stored, likely Taiwanese dry storage, and possibly even sealed storage.  It also has a factory feel to it like a Xiaguan, maybe especially in the later infusions.  It’s more of a generic factory taste in the last half.  Not sure how this puerh would be priced which depends on how old it is really.  I think this might be an option for offering something older but more affordable at Teas We Like.  Its profile is something that I don’t think I would be too interested in buying, either way.  But if the price was low it would be a bargain.


Guess: An aged possibly seal storage very dry Taiwanese stored factory production?  This one is the hardest of the blind samples for me to place…