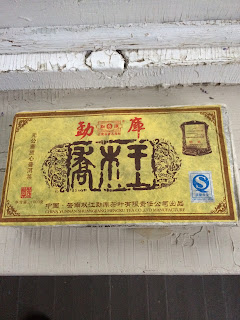 This was my first panicked purchase after realizing the puerh stash was dwindling.   When the shock wore off I immediately thought to myself, “Who has the most accessible selection of semi-aged puerh out there?”  Yunnan Sourcing came immediately to mind.  Upon searching their old site to replace some of the cakes I drank through, I came across this tea for which I have a long history.


I distinctly remember my first run-in with this burley brick back in 2007.  It was in a teahouse in Korea and the owner kindly steeped up some tea from a brick that was not for sale.  We at the tea table were mesmerized by the unique heavy but delicate tastes of this puerh at the time and, although I never consumed any in the 10 years that followed, that tea left a positive impression on me.


Back then nobody, I mean nobody, was talking about BingDao (“Ice Island”) puerh.  At the tea table we had many discussions about what kind of raw material could give out such a unique taste.  But, at that time, we didn’t even know that BingDao even existed- almost nobody did.  The location of the material of these early Mengku Shuangjiang Wild Arbour King (“Qiao Mu Wang”) claims to be from BingDao and contain at least some of this old arbour material.


So when I came across this tea I was both excited, curious, and relieved.  I always thought to myself that this tea would be a great example of a full, fragrant Lincang that would be great for aging.  Now, at 11 years aged and most of its life in Kunming storage, I guessed that this tea would have a nice leg up at the ageing process while probably ready to consume right now.  The nostalgic red and yellow colors of Scott’s old site was comforting and familiar to me- a space I could trust and had a familiarity navigating.  When it showed that there were only 6 of these 1KG bricks left in stock for $140.00 a piece (only 0.14/gram) all six bricks, six whopping KG of puerh immediately jumped into the cart.  China ground shipping took the full amount of time to arrive and 3 months later a heavy box of these giant bricks arrive at my door step. 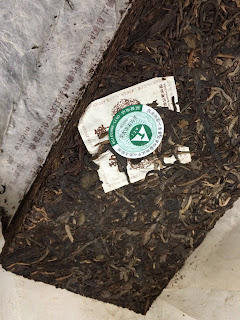 Please sit down, take some time out of your busy day, relax and join me for this special tea…


Dry leaves smell of soft deep, if not slightly distant, floral with a very nice tropical fruit odours embedded deeply into the leaves.  These leaves are liberally packed into the pot.


The first infusion opens up with full deep creamy malted sweet medicinal tastes and a nice fresh strong returning coolness that dips into the throat.  There are undernotes of slight hidden fruit and a slight metallic taste at the end.  The mouthfeel has a nice powdery fullness and it descends slightly into the throat nicely.  The tastes are bold and strong so I remove some leaf from the pot. 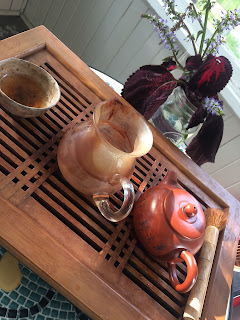 The second opens up with distinct florals in a deep pungent base of slightly citrus fruity puerh cloaked by a malty middle aged syrupy sweetness.  The aftertaste is a cool metallic floral sweetness.  The mouthfeel is a significant chalky fullness.  The leaves have clogged up my little tea pot so I move them to a larger pot and add the leaves I had taken out.  It is apparent that this tea needs very little leaf.  The qi of this tea really stays in the head giving you a very profoundly relaxed even euphoric high.  A new tea term that I see lots of lately is “stoner tea” to describe cha qi.  This tea has a relatively strong “stoner tea” effect. 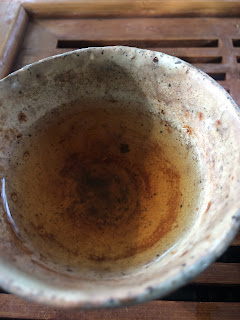 The third infusion has a creamy banana sweetness that lingers into a soft sweat floral tastes.  There is a full bouquet of malted slightly sweet but very distinct fruit tastes that are revealed when this tea is steeped more lightly.  It finishes with a very metallic taste.


The fourth offers very clean fruity notes of banana and tropical fruits as well as interesting citrus in a crisp slightly powdery metallic finish.  The qi profoundly relaxes and euphorically pushes the mind as if it has escaped my body, floating above it somehow.  Really great head qi in this puerh.  It doesn’t really linger in the body as much at all- it just says right in the head. 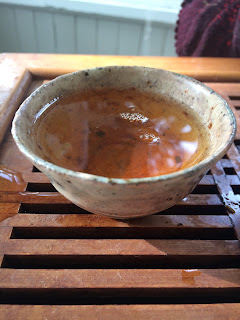 The fifth and sixth continue to push out an interesting array of fruity flavours in a fairly full mouthfeel.  A coolness is retained in the throat.


The seventh and eighth are long steeped and bring out slight camphor wood notes with fruity florals underneath. 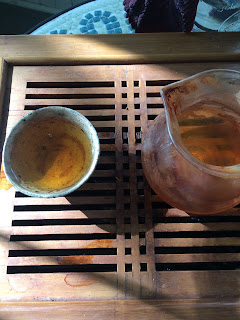 The ninth is left for a few hours and is now mainly woody with a bit of faint fruit. 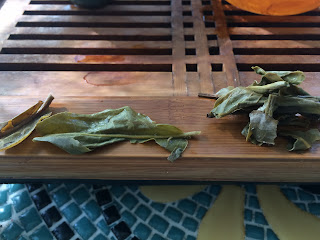 This tea is quite versatile in taste and quite stable in Qi.  When brewed lightly with less leaf and shorted steeping times you get a very fragrant, fruity, floral tea that still has some power to it.  With a heavier hand you will get deeper more syrupy and thicker medicinal notes like I have gotten above.  One thing is stable throughout- its heavier sedating head qi.


Do I regret the rather spontaneous 6 Kg purchase of this tea?  Not at all, but for someone whose favorite profile is not the Lincang character I think I would have been just as satisfied with 2 or 3 KG.  For those that are interested Scott has restocked this tea and is still selling them for $140.00 for a hefty 1 KG of puerh.  I have to admit that I have a hard time knowing what is truly a “deal” these days because of both the increased price of puerh and the fact that I have not sampled a wide range of Lincang semi-aged puerh.  However, this tea definitely falls in to my category of “Good Tea” and for the storage, age, and price I consider it as such.  I think it will continue to age into something interesting but is great to drink now.  I have not encountered too many puerh that were this inexpensive with such strong relaxing qi.

Tempting! But I see the price has already increased by 18%. Sometimes I wonder if tea sellers have some sort of algorithm on their websites that automatically increases prices when a quantity of a particular cake sells all at once. 'Stoner qi' used to be something of a holy grail of mine. Maybe it's age, but I much prefer a deeper, gentler qi now. Even so, the tropical and floral notes you mention about this one are some of my favorite notes in a puerh. Enjoy!


Welcome back and thanks as always for your comments here. Thanks for the offer but to be honest I still have not found a better semi-aged puerh for that price yet and I have been sampling more and more these days. Stayed tuned.

Semi-aged Lincang puerh seems to me to be a much better bang for your buck. Its always been this way but with prices so high nowadays it seems to be more stark.

From what I've read on your blog, I think you might like this one. Even with the price increase, I think it may still be worth it.

Scott is a smart guy and has been doing this for a long time. I also have wondered if vendors hike up the prices based on increased sale bursts or even just page views?

I think as a blogger you really have to be comfortable with the amount of tea purchased before you tell the world because it might either be sold out, or sold at an increased price or even just sold out a year or two later when you might want to restock.

6 KG seems like a lot, but a lot of good tea that I'm perfectly comfortable with.

Tea writers get accused of "blogger effect," that is, the price of the tea increasing after writing the article. But the price increased after the re-stocking, since Mattcha bought out the remaining stock. A more likely scenario is YS acquired more and the price they paid to a supplier went up, 18% is beyond the usual store increase. I have, by the way, inquired at YS before about "blogger effect" when a few people notified me of a price increase after one of my posts. The answer was a no, at least that is what I was told.

Okay here is the story of the markup of this tea as I imagine it...

When I purchased this tea on March 10th I cleared out the last 6 bricks in stock. The 25g sample was still available. It remained sold out until the new Yunnan Sourcing website was launched, then I noticed something funny. It listed the sample as the first purchasing option but you could also now purchase 1KG bricks at $140.00 as the second option which is not the way it usually displays on the website. I think it was listed just like this until I posted this article. I believe that this was restocked at the same time as the website change over and in the confusion the price was not correctly increased.

From the attention of this post, it is plausible that Scott then realized that the 1KG purchasing option should have been displayed first and the price adjusted.

Just a theory on that one.

I don't think there is a deliberate "blogger effect" but there is most definitely an indirect effect that a lot of attention could have on a tea, good or bad.