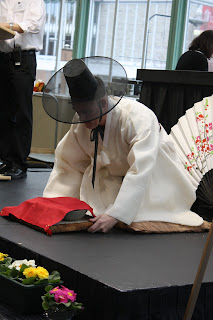 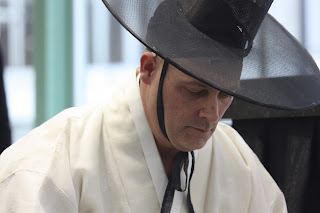 While, there always seems to be something at each annual Victoria Tea Festival that makes it unique. This year there were, at least, a few things which made the festival worth a visit. There was one exhibitor which was really impressive and where one had spent the majority of time at (more on that later). Met a few fans of MattCha's Blog which was also really nice and said "hi" to some of the festival veterans as well. The presenters David Caudwell and Greg Demmons were both extraordinarily good. With a special interest in Korean tea, Greg Demmons' performance of his Meditative Korean Tea Ceremony was the highlight.

Greg could be spotted in the busy crowd of the festival before his presentation walking through the crowds in full Confucian Joseon Dynasty governmental official hanbok. For his presentation he was doing a demonstration of the version of Korean tea ceremony which his master taught him from a modest mountain teashop on a mountain in a city just outside Seoul. He received the blessing of his master to preform the ceremony which he planned to do for the first time in North America at the Victoria Tea Festival.

Towering much taller than almost any other Korean man, Greg humbly set his tea setting in preparation for the ceremony. He mindfully brought the wooden slab with covered teaware out after placing the cusion down. Then he brought out the warm water kettle and waited to be anounced, to start his presentation.

He gave a simple synopsis of the Korean Tea Ceremony explaining that normally he would not ware the formal clothing and that the ceremony would include a longer duration of mediation than what will be demonstrated today. He said that the movements of the Korean tea ceremony (the purpose of the movements and the speed of the movements) are not only aesthetically pleasing but that they are also done for the purpose of getting the water to an appropriate temperature. He then went on to preform his meditative tea ceremony... 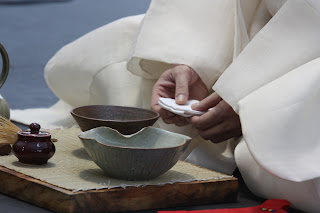 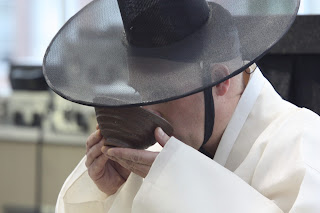 He moved very deliberately and with such mindful concentration. Those in the audience marveled at the beauty of this movements. They weren't overly exaggerated, drawn out, or artificial nor were they matter of fact, lazy, or without exact intent. Every movement was done to make a wonderful bowl of matcha (Kor: malcha). Deliberate, soft and graceful- one of the best Korean powdered tea ceremonies one has witnessed. Some of the hand movements, especially with the white hemp cloth was extraordinary. 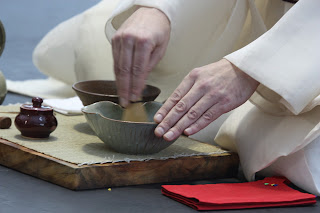 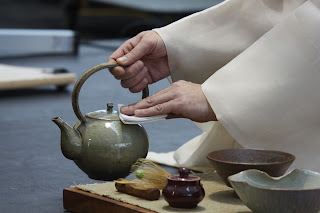 After the performance Greg took some questions from the crowd. He answered all questions true to the Korean Way of Tea even squeezing in a quote from the Saint of Korean tea, Cho'Ui. He explained that in Korea there are no lineages of masters or families with strict rules. He also explained how each person slightly changes their ceremony. He also answered questions on the intent of the person preparing the tea- they are placing all their energy, their qi, into the bowl of tea. They then transmit their intent to those receiving the tea through the performance but mostly through the tea - this is the Korean Way of Tea.

Great post! Thanks you! I wonder, does he live in Korea? I will be moving back to Seoul in a couple of weeks, I would really like to look him up.

PS: Do you know what mountain it is where the teahouse is? Sounds like a worth adventure!

Greg is traveling to India for the next year. Will meet up with him for tea soon and ask him for the details of his master's teahouse for you.

I would really love to get to the Victoria festival some day! If you ever make it down to the NW Tea Fest in October, let me know. There are several of us here that read your blog.

I'm studying Chanoyou and I notice here that he gets to drink his bowl of tea. (We make and serve tea, but seldom drink a bowl in the process.) Is that typical in the Korean ceremony? I like it. :-)

Thanks for the invite! Have to see closer to the date though.

You are a keen observer. Greg actually addressed a similar question at the tea festival. He pointed out that in the Korean powdered tea ceremony it is common for the person making the tea to drink the first bowl of Matcha. Then after imbibing the tea they offer bowls of matcha to the guests. Greg stated that this is done as a matter of respect for the guests as the tea maker can adjust his technique and perimeters to make an even better bowl of tea for the guests. Conversely, one had once heard from a Korean tea master that it is a sign of respect for the guests to let the person preparing the tea lead in taking the sips from the cup in the loose leaf tea ceremony and in preparing and drinking the first bowl of matcha.

It's an enlightening post, don't know much about Korean Tea Ceremony and now I know a little bit more.

Looks beautiful! Thanks for sharing.

Glad you enjoyed the post. Wish you could have been there.

Must have been quite the thing to experience! Thank you for sharing.

Recently picked up this here: http://o5tea.com/shop/type/black/ghorka-estate.html

Was wondering if you had it/reviewed it. If not, I'd be willing to send you up some. Been on a bit of a hiatus for formal reviews, but am going to hopefully get around to drinking this. It patiently waits on my tea table.

Yes, have tried some of that Ghorka Estate but have not reviewed it. Just had a cup at O5tea- can't really remember its character- very peachy, bright, and round. How did you enjoy this tea?

Owe you a post on the 2012 Yue Guang Bai (White Needles) from O5tea- stay posted in the next few days.

To be honest, haven't had the opportunity to try it yet. I'll have a small amount of free time on Saturday, will try it then, and at least take notes, if not a full review.

Refresh my recollection of the YGB?

Do you find any irony in being interested in a particular branch of tea culture that its home citizens seem to have extremely little interest in, for the most part, or is that part of what draws you to it? e.g., even in Taiwan, people have a sense that tea is for people over 40, yet the tea culture there is quite strong; my sense of briefly being in Korea is that 99% couldn't care less about tea. It was sad and bizarre to see how dominant coffee is there.

Have had that same question by old Korean men before. With that said, most Korean people are happy that Korean tea gets some, even if very little, respect.

Korean tea is simply the focus of this blog because this is where one was trained, educated, and acquired a taste for tea.