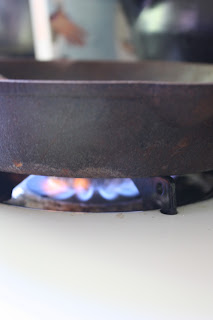 When Mina of Hankook Tea gifted the whole organic line of Hankook tea, she did so with unnecessary apology. She said that she was all sold out of the Organic Gamnong and was going to wait for the fresh 2012 tea to replenish her stock. As a result she sent an old 2010 Organic Gamnong she had sitting around and suggested re-roasting it. 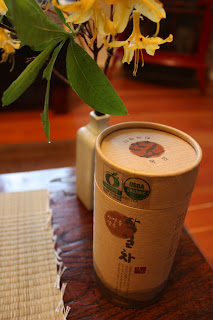 Although re-roasting tea is often done in the country and is a form of peasant tea, a way to use up stale tea, one really doubted the need for such measures. So this 2010 tea was prepared as is and the results were not so good. Later less leaf was used but still the result was not so good with the tea session halted after only four harsh infusions. One did realize something- over all these years never had one sampled Korean green tea that was over a year old. One has gotten into the practice of using up all the green tea from last year before the new year' harvest arrives. However it makes sense that the tea would not be very fresh as Korean green tea degrades rather quickly. Noticeable changes in the tea can be detected even in factory packaging six months after production.

This week has been quite cool, cloudy, and rainy so one spent it trying to perfect a roasting technique to bring this old green tea back to life. Below are the notes on the un-roasted stale Organic "Gamnong". Followed by commentary on how to achieve the best results on re-roasting green tea. Last are the final tasting notes on the re-roasted green tea. The results are interesting. First the un-roasted stale green tea session... 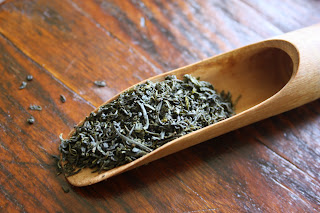 The dry leaves give off forest notes with nice balance of depth and freshness but overall very monotone forest notes come from the very small dry leaves. 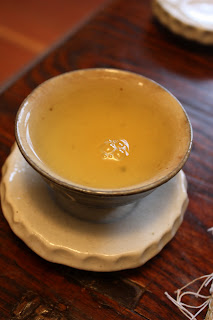 The first infusion is prepared and delivers soft grassy, barely roasted flat florals with soft sweet cornmeal-like tastes in a green-yellow soup.  There is a soft bland-bitter taste under these as well that is quite noticeable.  Faint floral notes travel to the nose in the aftertaste with some very light bland notes in the mouth.  The mouthfeel is soft in this first infusion. 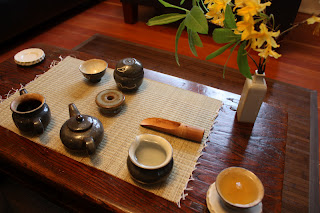 The second infusion has somewhat heavier perfumey florals which present first with distinctly bland and bitter notes. The mouthfeel is thin and coated. The aftertaste is of bland plums and grasses. 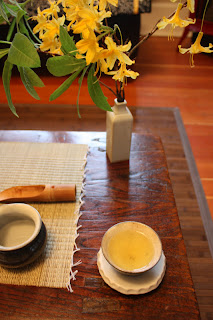 The third and fourth infusions presents strong bland-bitter unpalatable tastes. Floral tastes linger in the aftertaste over a distinct bland-bitter base. The mouthfeel is thin and sticky and reaches into the upper throat. The qi of this tea feels confused in the body. The qi roughs up the body, it is especially noticed in the stomach where this strange energy feels raw and hollow. This is a sign of improper chaqi. In fact, it even causes slight uncomfortable wrenching in the stomach and even makes one nauseous. Traditional Asian cultures refer to this cha qi as being cold, its energy stagnant. The tea session was ended here. 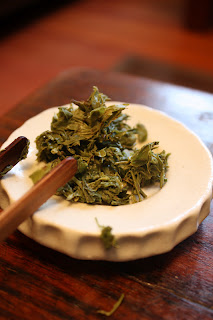 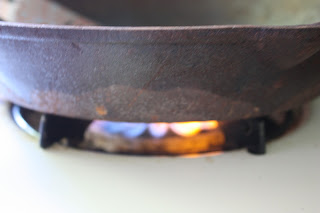 One used a old cast iron pan on an older gas range. The concept of re-roasting tea is to reactivate the tea's energy thereby bringing it out of its stagnancy as well as engendering the tea with warm thermal energy to counteract the cold thermal nature which it had developed. Cast iron is used because it distributes heat evenly and imparts a penetrating warmth- in the movement of the Five Elements it is said that Metal Controls Wood. Fire from the gas range imparts true warmth and changes the essence of the tea. 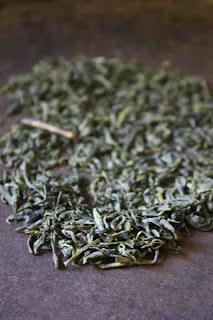 It is important to prewarm the cast iron over low heat before adding the dry leaves. The dry leaves should be only roasted for 1-2 minutes and stirred frequently with a metal spatula to ensure that the leaves are evenly roasted. The leaves should be only roasted until an fragrance is released. Fragrance is the yang aspect of tea with taste being the yin aspect. Movement and warmth are also considered yang entities. When the fragrance has been released from the leaves, its emotive essence has been awakened and warm energy has then been imparted into the tea.

It is important that the tea is not over-roasted or its yin aspect, taste, will be overwhelmed. If this happens the tea will loose its subtleties and simply give off a monotone roasted taste with a very simple, weak, but nonetheless, warming qi. A sign that the tea is over-roasted is that the dry leaves turn yellow in the pan. In the Cha Sin Jeon it states that, "if (tea is) put too close to the fire, it soon goes yellow."

The following are the notes for a successful re-roasted tea... 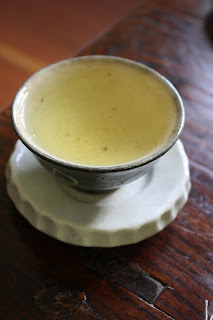 The first infusion is prepared and pours yellow. It has a soft roasted barley-rice taste with slight sweet edge. A smooth, mellow mouthfeel with soft sweet tastes are left on the breath. It covers the mouth in a soft coat especially on the sides and roof of the mouth. 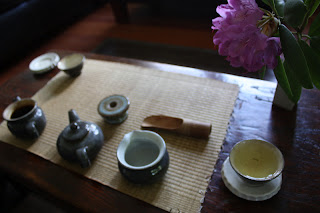 The second infusion is prepared and delivers distinct but soft roasted barley-rice initial tastes with melon sweet edges in the finish. The sweetness stays on the breath for a long time. The comforting qi warms the stomach slightly and mildly calms the mind. 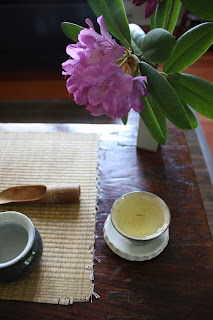 In the third infusion a distinct roasted taste now carries woody notes. The sweet melon flavours have now been pushed more into the late aftertaste and on the breath now. The mouthfeel is somewhat sticky and full. The fourth infusion is much the same this time with more of a grainy mouthfeel.

The fifth infusion becomes chalky in the mouth. The sweet melon tastes are now just faint on the breath. The sixth infusion is watery and thinner versions on this. 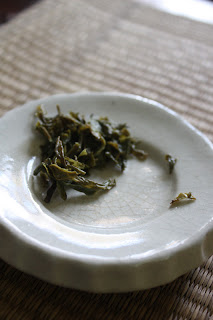 In the end the stomach feels warm and comforted, the mind feels at peace. Re-roasting tea is unlikely to make old tea as good as it once was, but it certainly makes it drinkable again.

The feelings are mixed as to whether re-roasting oolong actually improves the tea or simply sustains the tea/ hides the faults of a tea as it degrades. Some are of the view that good oolong need only to be roasted once and never re-roasted. See Stephanie of Tea Master's Blog for a great recent article (and the comments on this post) on aging oolong: http://teamasters.blogspot.ca/2012/05/aging-and-improving-tea-conference-in.html

Korean green teas are considered "re-roasted" because most of them are pan roasted during the initial kill green stage of production.

Thanks for your thoughts on this interesting topic.