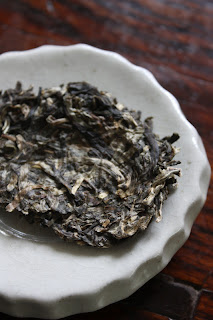 Can't remember ever trying a cake from Meng Fei Mountain, certainly ones experience with the Lincang region is limited, remember the Lincang mouthfeel more than the taste though. Today is as good as any to expand ones knowledge of this mountain and region alike. This cake is still available from Yunnan Sourcing. Interestingly, Yunnan Sourcing is for the first time carrying a 2012 Spring cake from this very mountain. Let's boil the water and get to it... 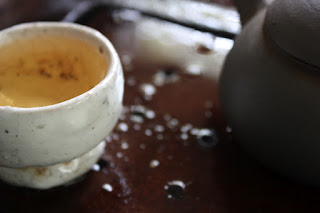 The first infusion delivers a drity, gritty, bland-forest tastes. There is a noticeable coolness in the throat along with a sour aftertaste and a faint sweetness that fades away quickly. The mouthfeel is quite full especially noticed on the roof of the mouth. The chaqi is apparent from the first cup with its strongish nature.

The second infusion presents a dirty, gritty, bland forest inital taste. Now it has hints of simple florals pinned undernieth as well as sweet, long complicated fruits. The fruity and sour notes last longest on the breathe. The distinctly cool-sour aftertaste develops a certain smoothness. The mouthfeel reaches the mid-throat opening it but is also felt on the roof of the mouth and in the teeth. Qi is strong as ones mind kicks up into a keen alertness. 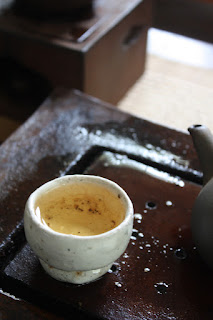 The third infusion offers a thinner, sour-citrus-gritty-forest taste now. It develops into a bland-floral citrus sweetness. The sour taste lingers in the mouth with slight mellow edges minutes later. With all that is going on, there is a bland note that prevents anything from being too vibrant and muddles it into the interesting profile. A result common in autumn puerhs. The mouthfeel remains full.

The fourth and fifth infusions offer a sour, meaty, forest initial taste with a slight citrus-sour-floral finish. Now it has lost some of its exotic, wild-foresty taste. 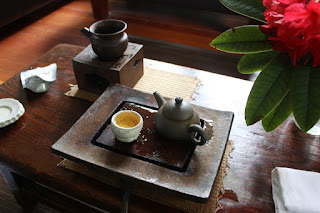 The sixth infusion offers a short lived foresty-soft-meaty-bland taste that turns into a distinct citrus-grapefruit finish with flowery edges. In the breath minutes later are bread-like starchy tastes. The qi is quite alerting.

The seventh infusion offers muddled, dry forest initial tastes with sour notes waiting undernieth. There are chalky-bitter grapefruit notes that finish the profile until minutes later reveal sweet citrus that lingers on the breath. The mouthfeel has become less in the throat and have developed a slight coarse edge that is felt even minutes later. This tea is quite interesting as there seems to be more flavour change with each infusion although not all are always as desirable. 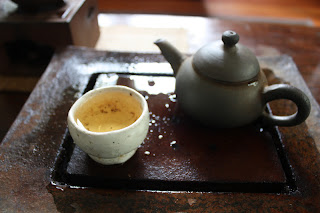 The eighth infusion gives us a creamy, sweet initial taste with a lingering bland forest which is pushed into the distance with a long citrus finish. The qi is still strong here but very relaxing on the mind. The ninth infusion is also much the same with a slight pungent quality mixed with the creamy-sweet initial taste and more pronounced sour taste that pairs with the citrus finish. A chalky mouthfeel develops in the mouth.

The tenth and eleventh infusions are more sour-foresty initial taste with the lighter notes disappearing. The aftertaste has a bitter, slight grapefruit edge. The chalky mouthfeel continues. The twelfth infusion is bitter, sour melon notes in a bland-forest aftertaste. 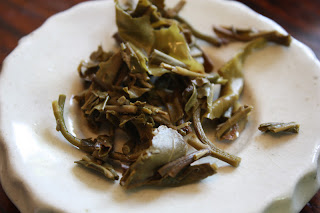 Hi,
I do agree on the tea. Just one thing - how did you enjoy it? You write excellent notes on teas, yet seldom your own opinion and feelings from the tea. Why so?
Jakub

I enjoyed this tea but that doesn't really say that much because I enjoy all tea (of course the exception being obviously tainted teas, which carry pathological qi- which are not enjoyed). When drinking tea, the moment is special, no matter what tea it is. That is why you see even detailed notes on very simple or "not good" teas on this blog.

Although I understand that it is truly impossible for the drinker to completely detach themselves from subjectivity, this blog looks to offer a more objective view of tea. Things like my opinions, comparisons of price, producer, of different styles, mountains, suppliers are just mine and don't offer that much insight into the actual tea. However I understand taste, smell, mouthfeel, and movement of qi are also influenced by experience so it is not purely objective. But as you state, most people generally agree with the notes. If you read them, you can see, within the objectivity, which teas are more complex, flavourful, ect... over others if you wish to compare. As the title of the blog suggests, it is about the tea not so much about Matt.

It seems also a bit strange to give my opinions on this 2010 Yunnan Mang Fei because I don't recall having a cake from this mountain, I never buy autumn puerh cakes, and I rarely buy young puerh cakes and prefer ones that have a bit of humid storage at least for a few years, although I enjoy drinking many many samples. Overall, I wouldn't recommend purchasing it, but as I stated, I have always told people not to waste money on an autumn cake when there are so many better spring cakes available. However, in the fall I always enjoy a nice younger autumn puerh as it harmonizes somewhat with the season. This cake was interesting as its flavour profile changed so much from infusion to infusion. It was short on stamina and puttered out quickly. Overall its flavour profile lack a certain full depth as most autum cakes do. Hope that was enough opinion for you... hahahaha...

I would love to read your notes or experiences with this tea. Have you published a post on this cake Jakub?

Hello Matt,
what you say makes perfect sense - and I do believe that your style of "de-self-ization" makes the posts more objective indeed.

Sometimes, I just enjoy to know more about what the writer likes himself and all that, that's why I asked.

Yes, this was enough of an opinion, thanks! :) As far as I can remember, I agree entirely. I rember that I disliked certain tobacco smell which, I believe, often appears in young Mangfei and gets lost in less than a year.
All the best!
Jakub

Didn't get that tobacco type smell at all. Maybe it had subsided as it is 2 years aged.

It would be also interesting to sample the 2012 Yunnan Sourcing Spring Meng Fei to see if that smell is a characteristic of the mountain.

Thanks for your thoughts.

Had a sampler of the 2011 Meng Fei, and recall getting tobacco in both the scent and flavour profiling.

Interesting contrast in cha qi: yours went upwards, and made you feel alert. Mine went down and... err... well... yeah.

Have always appreciated the objectiveness of your posts, Matt. That being said, you're a very well respected member of the community, and I think what Jakub was trying to infer (and if not, I will) is the fact that a lot of us look to your opinion.
~Jess

Thanks for all of your kind words.

If you (or any other readers) ever want my option on something just ask and I will give you what I got.

Good luck with those punchy, strong young sheng puerhs too. Remember that they are not meant for those with weak stomachs- too cold and bitter... hahaha

A Student Of Tea said...

May I persue a bit more the opinion issue.
While I find your reviews highly inspiring, both in the detailed perceptions as well as in the ability to put them into words,I found myself missing something too ... more than an opinion it is a kind of summary.

From a practical point of view I noticed also with my own notes that a small summary of the most salient features makes using them later on a lot easier - and useful, even though on the other hand I am aware of the impatient attitude that tends to creep in. What do you think about that?

A summary of sorts is a great way to sum up a tea tasting. It too has pros and cons. The best part of a summary is that it is easy to refer to and, in the end, is a commentary on the most salient points of the tea session. It makes points which you can easily fall back on when wondering what X tea was like. As you mentioned, there is also something a bit lazy or impatient about it as well. A summary often is a judgement on what observations are the most important in a tea session.

Sometimes little snippets of summaries sneak into the tea reviews on this blog, but for the most part they are avoided because they negate what actually went on in the session to a positive or negative statement- most teas, especially puerh are much more complex than this, and so are ones sessions with these teas.

As far as leaf ratio, temp, steep time. Sometimes will add that in as well especially if there is a big discrepancy when this is done. If someone inquires in the comment section advice is usually doled out. Becoming too technical destroys the tea session for me so, I tend not to go there.

Thanks for your wonderful feedback. Perhaps I will add a bit more summary.