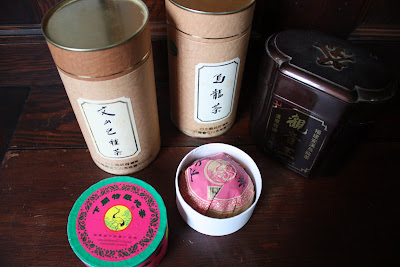 There are not so many places in North America where you can just stumble upon nice, forgotten, aged tea. Even thoughtout Asia these days, finds of old forgotten treasures are rare. Once in a while you hear of people hitting jackpot (see here and here). But your chances of this are slimmer than winning the lottery. In North America your chances are almost 10 000 times less likely. However, coming across some forgotten 10-20 years aged teas for the original asking price is not that far fetched here in North America.
The best place to look are those old, run down, Chinese herbologist shops in town. These shops frequent the Chinatowns of North America- almost every city has one. Chances are that you will probably only come across cheap, poorly produced shu puerh that smells like medicinal herbs or poor, mass produced Tie Guan Yin that is now just a few years old. These old, and often overlooked shops are also your best chance for finding some treasures.
One happened to stumble upon some, yet to be sampled, aged teas that are in the 8-20 year category- a 2004 Xiaguan "Zhi" tou, a very worn 250g box of Anxi oolong, and two sun faded and stained 325 g cylinders of Taiwanese oolong. These teas were found in one of these run down shops. The owner seemed happier than ever that one was clearing out all that was left of his old tea which he explained has been sitting up on that shelf for years and years.
One sampled the Anxi and it tasted solid. Be prepared for tasting notes of these mystery teas over the coming weeks and months.
Feels good to be back behind the tea table.
Peace
Posted by Matt at 3:45 PM

Yeah I buy those green containers whenever I see em. Had to figure out the sheng from the shu.

And may you come across many old green containers :)

Wow! I've never seen the pink wrap xiaguan tuo in North America! Which year is it?

It definitely stuck out on their shelf- it was the only one they had.