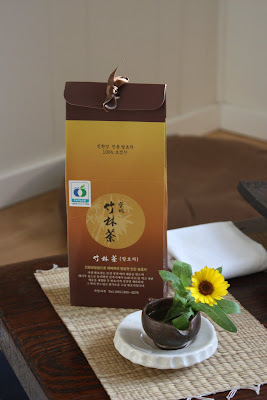 This tea is from the tea growing area of Boseong. The box and bag of this tea displays the blue label of organic certification which indicates that no agrochemicals have been used on this tea. As the water boils, one takes a whiff of the long, gangly, dark greyish leaves. They smell of salty, fruity smells. 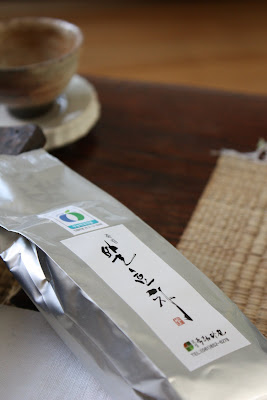 The water is left to cool in the cooling pot for a short while before it plunges over the dry leaves resting in the pot. 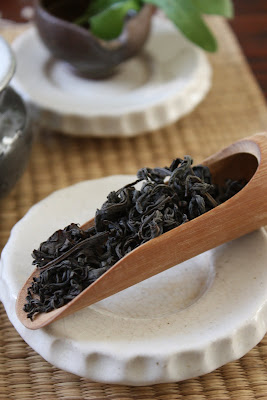 The first infusion is very juicy with a warm sugary, spicy cinnamon chai aftertaste that turns salty in the mouth. There is no astringency in the mouth but rather a light coating that results from this light bronze-yellow liquor. 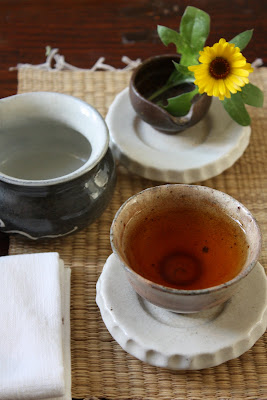 The second infusion is also very juicy with a light, fresh, watery feel its flavour is initially bitter, buttery, with the slightest suggestion of chocolate. The second is the only infusion where any chocolate tones can be pushed out of this tea. This flavour comes and goes after you slurp a mouthful back. A deatened, dry, salty-nut flavour is left behind in the aftertaste. The mouthfeel is full here and covers the whole mouth in a delightful fuzz. 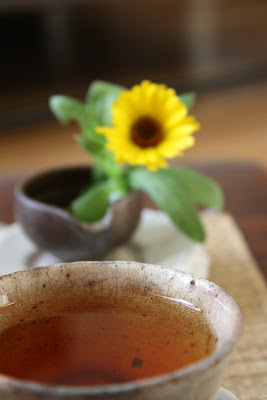 The third infusion the juicy, creamy, buttery chocolate tones are already gone. A thin fuzzy mouthfeel develops especially on cheeks, roof, and in a bit of the throat- less on the tongue. This tea is not that sweet, but the sweetness it does have is more of the unrefined type. The smooth creamy feel and salty aftertaste stand out in this infusion.

The fourth infusion has a salty, nuttier taste and a nice dry mouthfeel that now dries the tongue. The qi of this tea is not at all noticeable but nevertheless do the job of alerting the mind. 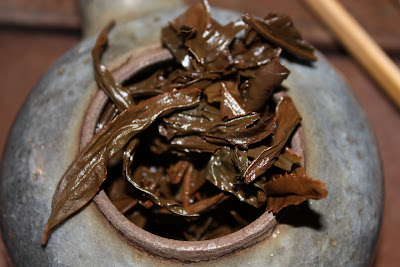 The resulting infusions are mainly just salty bland notes. The flavor of this tea drops off fast leaving weak infusions for which to reflect on this tea.

Is tea like this mainly only available in korean shops?

You can try your luck in some of these L.A. Korean Supermarkets if you are in the area:

But even in Korea an "Organic" yellow tea is quite a rarity.

Wow !!
Thank You for your Posting.
Good information.

Glad you liked it!

It's true that most Koreans have never heard of or tried yellow tea (bal hyo cha)- perhaps you are one of the majority?

Um...
That is connected on Korea history.
Someday, I wanna to talk about this.
I love tea as you are.
If you want, I can recommend other yellow tea.

and I'm sorry,
My ability of english is not good.

Firstly, thanks for commenting, your English is quite understandable. :) On your blog it looks like you are a fan of Boyicha (Eng- Puerh)!

Is it because of history that most Koreans know very little about Korean tea?

Is it because of history that most Koreans know very little about Korean yellow tea?

One understands the historical reasons why most Koreans know very little about Korean tea in general.

Isn't Korean yellow tea a rather recent way of producing Korean tea (within the last century)?

Thanks for your comments and interest.