Touring Darjeeling: Tasting The First Darjeeling Teas Of 2009 In The Goomtee Tea Estate 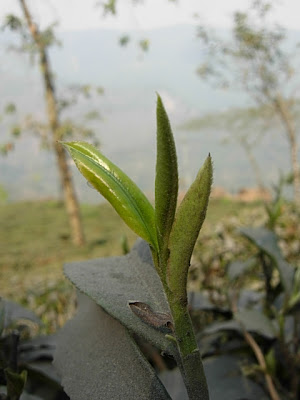 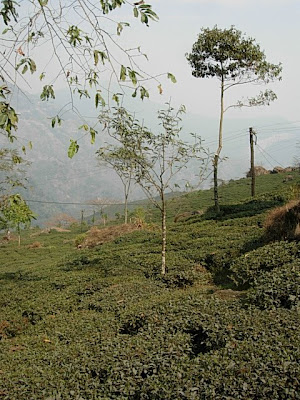 One was picked up from the train station by Rajiv Lochan, of Lochan Tea. After morning tea and breakfast with his family, we were off to the area around Kurseong. As we climbed the winding road to Darjeeling, tea fields began to dominate the mountain sides along with tinny train tracks. 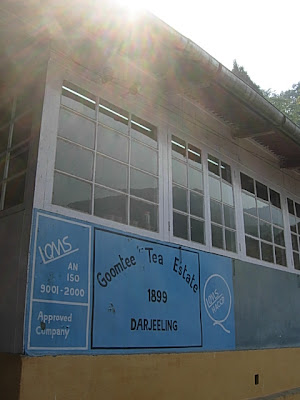 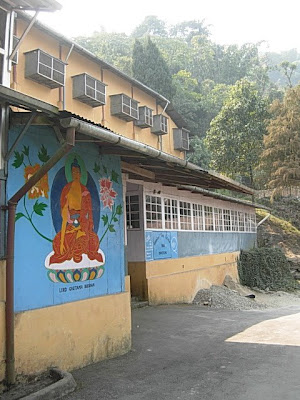 Our first stop was the famous Goomtee tea estate established in 1899. Its tea bushes lay low along the mountain side while its production facility, over 2000 meters above sea level, sat stately overlooking the maintained tea growth. The buildings outer walls were decorated by ancient symbols and paintings of the Buddha with labels in English. Inside, one went through the production method with S.S. Rowat, the manager of the estate.

One could blog on and on about Goomtee’s history, gardens, product, and production methods but why reinvent the wheel. Goomtee has an amazing web site which outlines all this and much more is such detail, please do click on this link and snoop around for a while. The site is a real gem. 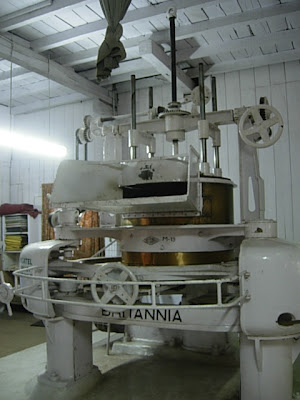 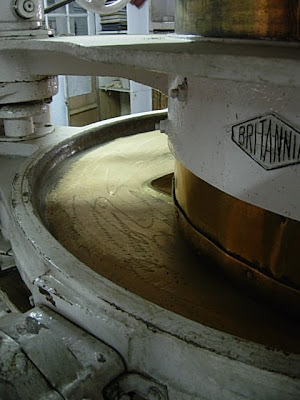 Actually, we didn’t even get through the tour of the facility. Mr. Rowat became a bit sidetracked, and for good reason. While he was walking us through old rooms and massive machinery used to produce Goomtee’s quality product, the first cupping on the very first day of first flush tea picked for the 2009 season was commencing. Basically, we just took a B-line right to the tasting of the tea- tea that was produced just hours before. 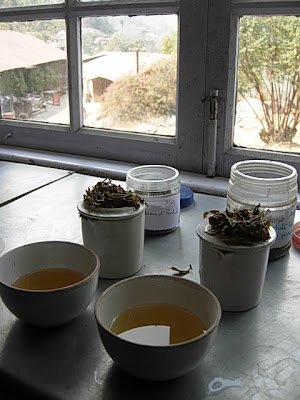 We sipped from large cups of classic Darjeeling green and a rather fancy Darjeeling white. We sipped, pondered, shared our options, and sipped more. This infant tea, like others consumed hours after production, has a certain kind of taste, a taste of youth that all greens seem to carry for just hours after production. Mr. Rowat said that this taste is the ‘fire’ that remains in the leaf for a few hours after production but latter dissipates. This ‘fire’ also seems to affect the qi. The initial qi possesses a youthful energy that always hits the stomach hard, another characteristic of all recently produced green tea. These tastes and feelings from drinking such young tea reminded one of sipping recently fired tea beside the cauldron in Handong, South Korea. There is something about this experience that is almost spiritual, a celebrated birth of tea.

Mr. Rowat mentioned that the tea here in Darjeeling is so sought after that it sells before it is even picked. He mentioned how the first flush white tea will go to a German tea company this year that is egger to have this wonderful spring delight before Easter. He said that they purchased it without even tasting a sample of this year’s product. Apparently, due to the overly dry conditions in Darjeeling, this year’s first flushes won’t be as good as the last few years (but still amazing when compared to other teas) but that the second flush should be of the highest quality. They can apparently determine this all from the weather conditions. 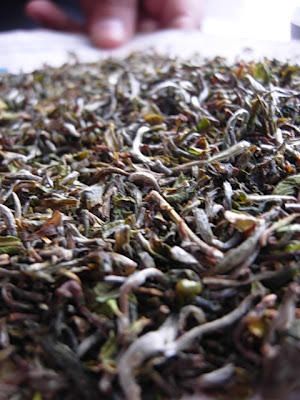 Viewing the fields below, one sipped these fresh samples with a big smile and found no fault in them.

Oh, I loved visiting Goomtea! They have the best factory for demonstrating tea production in the region. If you're interested in organic production, be sure to visit Makaibari, and tell Rajah that Lindsey "Vee" Goodwin sent you. I'm sure he'll show you around. :) The tea research facility in Kurseong is also worth a visit if you're interested in the more technical aspects of tea. And Castleton is cool -- the manager is very friendly. Next time I visit, I really want to see Ambootia, too. Oh, and be sure to eat at the hotel next to Ambootia, just up from Makaibari. It's delicious! I look forward to hearing more about your visit!

Goomtee’s factory is very spacious and nicely laid out. It never occurred to one how that could be best for tours. It seemed even bigger because it was empty when we walked through.

Thanks for all the helpful tips. One heard very good things about Makaibari and Castleton, but didn’t have time to visit them.