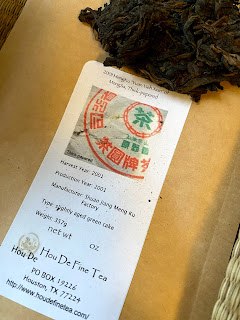 I’m excited to try this sample which I purchased from Hou DeFine Teas ($350 for 357g cake or $0.98/g) because I have never tried a Hongkong traditionally stored cake from Mengku before despite my broad experience with Mengku Shuangjiang Factory puerh.  I’m not even positive if I’ve even sampled Traditional Hong Kong Stroage on a Yiwu before either… this will be interesting…

First infusion has a rich dirt taste with mineral stone over a slippery woody dirt very mild soft menthol finish.  It feels slightly watery and slippery in the mouth.  A smooth dirt woody.

The second infusion has a strong creamy citrus sweet lemon zest almost bitterness mixed with heavy composting dirt and wood.  The sweet lemon woody taste lasted even 10 minutes later on the breath.  It was over a slippery mouthfeeling with a chalky mid tongue feeling and an onset of hypnotic Qi.

The third infusion has an almost coco with orange fruity onset over a rich slightly creamy woody thick dirt taste.  The mouthfeel is oily and smooth with a mild menthol throat opening.  There is a dense bodyfeeling globous of warmth below the diaphragm and a building hypnotic comforting sensation in the mind. 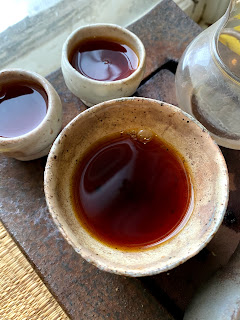 The fourth infusion has a rich woody resin with creamy almost floral suggestions with a creamy menthol finish with distinct woody dirt.  Warming Daiphramatic Qi with some hypnotic feeling in the mind.  Very soothing and tasty.

The fifth infusion has a creamy sweet woody almost floral tangerine like aftertaste after mild woody dirt menthol base.  There is a thick oily bread and creamy woody dirt sweetness.  There is a certain oily floral edge to this puerh which makes it really enjoyable.

The sixth and seventh infusions have a creamy dirt sweet onset with a floral breath edge.  The menthol is less now and was really faint to begin with but a more floral woody dirt kind of finish.  The warm Qi under the abdomen is notable and beautiful.  Hypnotic and soothing Qi sensation.

The eighth infusion has a woody dirt mineral taste with a deep floral pungency in an oily and finishing chalky on the mouth.  The throat and mouthfeeling is really nice full and chalky feeling.  The Qi is strong and soothing warming the body.

The 10th has a creamy woody taste with the floral breath taste gone now.  There is a bit of mineral and storage taste with a very faint menthol on the inbreath.  Warming feel good Qi here.  Very soothing on this cold winter day.

The 11th is much the same woody dirt almost menthol wood over a chalky full mouthfeeling and subtle chalky throatfeeling.  Not much floral or tangerine or creamy sweetness now.  Great soothing warming Qi!

The 12th infusion is pushed into longer infusions but not much other than dirt woody faint menthol over a subtle chalky mouthfeeling with not much throatfeeling left. 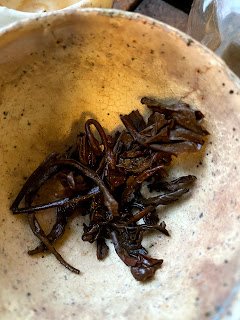 This is the first Traditional HK stored cake with a distinct floral taste to it which is interesting to me.  Overall, I’m not sure if it’s worth the price or not.  I’m always of the thought that Yiwu and Mengku areas are much better dry stored.  This one is no exception but nicely enjoyable either way!