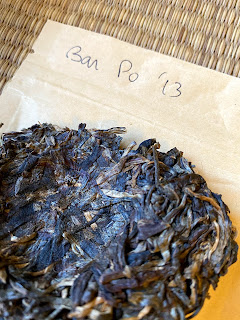 I was really excited when I opened my order only to find a complimentary sample of the no longer listed 2013 Puerist Ban Po Lai Zhai.  There have not been very many puerh cakes offered from Ban Po Lai Zhai in the Western market over the years... Probably just this one other than the many offered on Puerist.  I have a long and rather interesting story about the most famous Nannou area puerh producing village Ban Po Lai Zhai that I have never told…

Way back in 2010 I met a now famous Pedro Villalon (of O5Tea fame) who had personally procured some 2009 Ban Po Lai Zhai gushu maocha from a farmer Yang Si.  It was one of the first times that I encountered loose Gushu type tea being described as puerh.  My idea of puerh, even at that time, was heavily influenced by older factory productions.  Gushu productions were just starting to roll out and the understanding of them was confusing at best.  I remember having a good debate with Pedro whether or not this gushu maocha was “real puerh”.  In the end I ended up buying all he had on him at the time and still have a bunch in tins.  Recently, he pulled the remainder of this maocha out of storage and has it for sale on his site.  I have not sampled mine in a while and should try it again…

Anyhow back to this one…

The second infusion has a slight smoky earthy pear like taste upfront with a cool menthol finish with wood and some creamy tastes.  The slight smoky finish is long in the throat which is moderately deep and carries a creamy candy sweet almost pear and dirt like taste.  The flavor is nice and full here supported by a full soft tight mouthfeeling and mid throat depth and long finish.  The Qi is nice and warming in the body and I feel my chest feel warm and soothed.  It gives the body and nice soothing feeling overall.

The third infusion has a strong syrupy pear and smoky onset.  The texture is thick here with a smoke and pear and dirt and and sour and wood dense flavor initially.  There is some coolness and a more candy like sweetness over dirt wood and smoke to finish.  This has a strong backbone of tastes that cover a slightly tight full mouthfeeling and mid to deep throat feeling.  The Qi has a soothing warmth in the chest.  There is a strong soothing focusing feeling in the mind as well.  The Qi is strong but not stimulating but rather soothing. 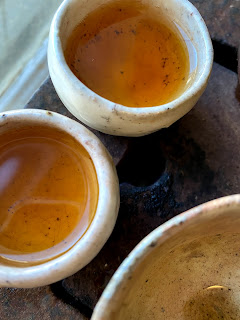 The fourth is a cooled cup and tastes of dense syrupy fruity smoky, almost wood-dirt very thick full and dense presentation with a slight full and tight mouthfeeling and opening deeper throat sensation.  The sensation pushes saliva into the mouth and upper throat and holds a nice long caramel smoky taste in the aftertaste.

The fifth infusion has a strong almost tobacco leaf, woody pear and dirt like tastes.  Sometimes this initial taste is almost like yam mixed in with the dense layering of woody, pear, caramel, almost bitterness, and even candy.  The candy and smoke come out more in the moderately long aftertaste with some throaty pungent coolness and saliva producing action in the upper throat.  The mouth and throatfeeling are pretty enjoyable.  Warming Qi with slight but strong dizzying euphoria.  Still a touch of astringency that I can feel in the stomach.

The sixth infusion has a dense syrupy onset with notes of dirt, pear, wood, yam, tobacco leaf, smoke, mild bitter and sour.  This initial taste is a balance between, bitter, sweet, bland, smoke, and even sour.  It breaks with a mild cool mid throat pungency which turns more candy and smoke out of it.  I would say this is mild-moderate smoke.  Warming soothing qi and strong headiness.

The seventh has a lighter fruitier approach with a slight smokiness that is more elegant with smoke.  There is less tightness in the mouth and more of a soft coating.  The Qi is nice and uplifting and slightly euphoric.

The eighth is a cool cup and delivers a dense very sweet creamy, pear, fruity, candy like sweetness that expands with the low coolness in the mid-throat.  There is a slight dirt yam wood note over the candy sweetness in the aftertaste.  The taste is pretty complex.  Not that much smoke at all here.

The ninth infusion is another cool cup.  This day at work became surprisingly busy and unpredictable.  It gives off a cool creamy sweetness with a long menthol coolness underneath.

The 10th has a long creamy almost fruity and slight dirt woody taste.  There is a long candy finish after the pungency is gone.  The mouthfeeling is more of a flat full tight almost sandiness with not as much throat stimulation now.  Nice relaxing euphoria.

The 11th infusion is a hot one and tastes of slight bitter dirt over creamy sweetness and only very faint smoke in the background now.  There is a cool finish that pushes out some bitter-woody-dirt and almost candy like sweetness.  The mouthfeeling is tighter in this hot cup.

The 12th has a woody-dirt-bitter onset with an emerging apricot fruitiness.  There is still lots of oily texture in the liquor and nice depth of flavor which now includes coco tastes.

13th has a creamy caramel woody dirt taste to it initially.  There is a cool pungency then a nice creamy sweetness no smoke anymore.  A thinning tight full feeling with less throat stimulation and open throat.

14th is a fruity slight smoky fruity pear note with a creamy finish.  There is some pungency then a nice slight smoky, dirty, woody, creamy sweetness.

15th is a woody dirt yam-carrot and candy initial taste.  The pungent comes as does the dirt-woody but mainly candy finish.  Full tight mouthfeeling and throatfeeling.

16 is more of a watery fruity tobacco taste with a creamy fruity woody finish after pungency.  Lots of taste still in this compressed binghole sample.

I walk away from the table today to come back to these leaves tomorrow.  The next day I mug steep the spent leaves out and get a surprisingly sweet floral with a dirt yam and mild bitter almost woody taste.  Mainly sweet fruity but with depth and some strength left in the leaves. 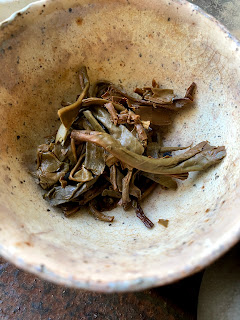 I really like this Nannou with nice full taste presentation that walks the intricate balance with smoke that fades as the session progresses.  The smoke is that real nice elegant tobacco type that is really a background to the oily texture and sweet fruit, long candy, and dirt almost vegetable tastes.  There is a nice balance of tastes in here sour, sweet, bitter, pungent. The nice throat feeling and relaxing euphoric Qi seal the deal with this one.

After tasting this one Mark told me that he sampled 13 different maocha from Ban Po Lai Zhai in 2013 and that this is the one that he selected.  This stuff is Nannou Gold.